The Transpacific Eastbound (TPEB) market continues to be challenging. Rates, capacity and equipment are currently at a premium. With Golden Week approaching, we don't anticipate conditions easing until after the Chinese holiday.

China's Ministry of Transportation and Communications met with a group of major ocean carriers in Shanghai on Friday, 9/11, to discuss new capacity reporting requirements. With spot rates in the transpacific trade hitting record highs, the Chinese Government urged carriers to add more capacity and lessen the aggressive rate increases.

After the meeting, our agents in China reported that COSCO and OOCL withdrew their planned blank sailings for October's Golden Week to clear the backlog. The story is still developing and how this will impact the industry at large remains uncertain. We'll continue to monitor this situation.

Demand is still strong and space is full for the Pacific Northwest (PNW) and U.S. East Coast (USEC) with heavy roll over. Space is also full to the U.S. West Coast (USWC). In some cases, space is full through the end of October already. Be sure to book your shipments at least 2-3 weeks in advance.

Equipment shortages in Asia are a big problem for a number of carriers, driven by spike in U.S. and European imports post-COVID. These equipment shortages at origin may keep rates higher than they would normally be without this problem. Lack of 40'HQ containers especially is causing delays for some shippers.

The situation is further exacerbated on the West Coast, where warehouses are taking longer to turn freight due to COVID-19-related staffing shortages and lack of space, leading to chassis & equipment sitting longer than normal.

As a result, carriers are reducing the amount of free time they would typically give, or in some cases, even revising contract free time to keep equipment moving.

Pay very close attention to how much free time is available for your shipments and make note of any changes. Keep an eye on your shipments where the Last Free Day (LFD) is approaching and be sure to prioritize unloading those containers and returning the equipment to avoid late fees. These fees, also known as "per diem" charges, are typically assessed by the ocean carrier or marine terminal and can rack up for each day the equipment is held past its LFD. It's very important to proactively monitor your free time and return your equipment as soon as you can.

Learn more about demurrage, detention, and per diem charges in our guide.

Rising container volumes, restricted capacity, and equipment shortages will continue to hold rates at record levels. Golden Week (the first week of October) is the first realistic opportunity for the market to correct. The rebound from Golden Week will be telling as to what to expect for rates in October/November; a soft return may lead to reductions, whereas a robust return suggests continued elevated rates.

Transpacific Blank Sailings By the Numbers 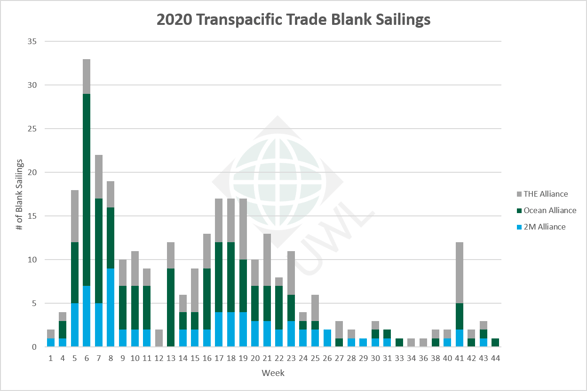 What is a blank sailing? Learn more here >>

Canada: Terminal congestion continues to impact the ports of Vancouver and Prince Rupert and yards at both terminals are operating at 100% capacity. In Prince Rupert, growing imports and issues with labor availability due to COVID-19 are causing delays, with vessels not expected to return to proforma schedules until mid-November. The congestion is also impacting inland rail transit so expect longer rail dwell times, averaging around 3 days for Prince Rupert.

New Orleans & Mobile: Ports in New Orleans, LA and Mobile, AL will be closed 9/14 and 9/15 due to Hurricane Sally.

Chicago & Denver: The JOC reported that due to a recent surge in intermodal traffic, Union Pacific Railroad will no longer allow beneficial cargo owners (BCOs) to drop international or domestic containers in Denver and Chicago more than two days before their train is scheduled to depart.

Houston: Terminal is recovering from impact of Hurricane Laura, with full recovery expected by Sept. 12.

Nashville: Temporary track maintenance at the CSX Nashville facility will impact gate hours. According to a notice from Hamburg Sud, "The terminal will have extended gate hours from 0700-1900 with temporary gate blockages between the following hours: 0700-0830, 0930-1100, 1230-1400."

Long Beach: Due to reduced volumes from blank sailings, Long Beach Pier A terminal has adjusted its gate hours with some closures announced.

In Latin America, vessel space for September is already full. Be sure to work in advance for bookings in October because space is already looking tight and there is no forecast yet for normalization. Expect some GRIs for October — Hamburg Sud and MSC have already announced theirs.

“Cargo is following a fairly typical recession recovery cycle, unlike the air passenger business which clearly has been hit by an unprecedented shock. In a recovery period for the world economy, which is what we’re entering now, typically companies turn to air as their preferred mode of transport to get inventory, components, production and facilities going as quickly as possible to supply recovering demand," Pearce said, according to the report in Air Cargo News.

He explained how the demand for air cargo looks to be strong and freighters are serving a bulk of that demand. “If we look at what’s happening to the capacity side of the cargo business, clearly the freighter fleet is being utilized probably as much as it can be, given that the rise in daily hours that we’ve seen happen over the last few months. Record highs in that freighters are in the air serving demand,” he said.

“A problem was the grounding of passenger fleets, particularly widebody aircraft, which are typically used on long-haul passenger routes. There clearly has been some use of passenger aircraft for cargo, but that’s still a serious constraint,” he explained.

Importer HMTX Industries LLC and two of its subsidiaries (complainants) recently filed a complaint at the U.S. Court of International Trade (CIT) alleging the USTR unlawfully escalated the ongoing trade war with China when it imposed the List 3 tariff actions. If successful, this lawsuit could mean a refund of all Section 301 duties on List 3 goods from China. To take advantage of this potential refund, act fast. Importers must file independent claims by this Friday, Sept. 18. Contact Shannon Dillinger at s.dillinger@shipUWL.com or call 440-895-8212 if you have any questions.

Learn more in our update here.

U.S. Customs and Border Protection (CBP) issued a notice announcing it will extend the 45-day transition for compliance with EO 13936 on Hong Kong normalization for another 45 days, through Nov. 9.  This will allow importers additional time to comply with the marking requirements, where goods produced in Hong Kong will now need marked with the origin of "China". Note however this change in marking requirements does not affect country of origin determinations for purposes of assessing ordinary duties under Chapters 1-97 of the HTSUS or temporary or additional duties under Chapter 99 of the HTSUS. Entry summary procedures also have not changed.

The USTR announced exclusions for List 4 Section 301 Tariffs on products from China, which will apply as of September 1, 2020, and extend through December 31, 2020.  Just 87 of the 200+ List 4 exclusions were extended, leaving the rest to expire as of Sept. 1.

A trade deal between the U.S. and India could happen before the November elections.

In a recent speech to the U.S.-India Strategic Partnership Forum (USISPF), India’s Economy Minister Piyush Goyal said. “I just had a conversation with Lightizer that the entire trade package is ready and we can do it before elections…I’m open to signing it tomorrow. I have left it to Bob (US Trade Representative Robert Lighthizer).”

The deal could include restoration of the GSP benefits to India and market access for each other’s agricultural products, The Economic Times India reported.

According to a recent article from International Trade Today, CBP on Sept. 2 submitted to the Office of Management and Budget a proposed rule titled, “Excepting Merchandise Subject to Section 301 Duties from the Customs De Minimis Exemption.” This change could eliminate the $800 de minimis exemption for goods subject to Section 301 tariffs, which could impact eCommerce and small parcel shippers. The proposal will be reviewed before published so it is not final yet.

We will continue to keep you informed of the latest market developments.

Should you have any questions or if you need assistance, please contact your local UWL customer service representative or reach out here.