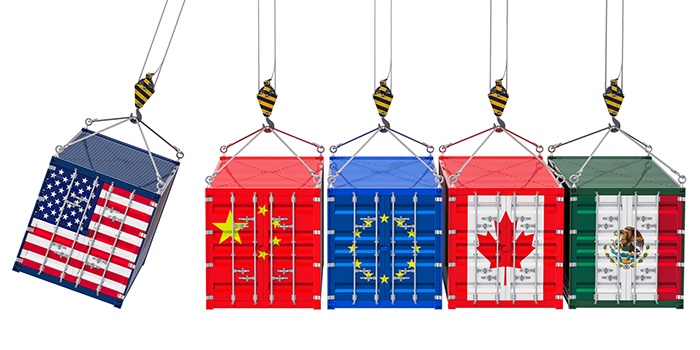 Trade disputes and tariffs always have an effect on the global shipping and logistics industry, no matter who is involved. In 2018, however, there have been some big changes that are having potentially huge impacts on the industry.

Although we’ve examined some of the changes thus far in past industry news articles, for this post we will take a more in-depth look at the tariffs and trade disputes, the impact they have/will have on global logistics, and what led to this moment.

How We Got Here

The beginnings of what many are calling an all-out trade war started in January 2018 when President Donald Trump announced that the United States would be implementing tariffs on Chinese imports of washing machines and solar panels.

Since then, there have been a number of tariffs and trade disputes announced for a variety of countries, including more tariffs for China, the European Union, Mexico and Canada, with many of these countries responding with tariffs of their own.

Supply Chain Dive provides a great overview of each step in the trade war, if you would like more information, but we are going to take a look at the main highlights:

As of the beginning of October, the U.S. is also in the midst of trade talks with Japan and South Korea, which many think would allow President Trump to focus on China even more.

The Impact of Current Trade Disputes

Now that we have a rough understanding of what led to the current trade environment, let’s examine just how this is affecting businesses and logistics.

While some industries may be benefiting from the ongoing tariffs, others are struggling under the weight of the newly added costs.

The Good and the Bad for Businesses

Shortly after the implementation of the steel and aluminum tariffs, many U.S. companies turned to domestic metal manufacturers (an intended result of the taxes) to fulfill their material needs.

This helped metal manufacturers increase business, but with this higher demand, those looking to purchase steel or aluminum soon experienced increased pricing and lead time.

We’ve also seen companies moving parts of production overseas, like in the case of Harley Davidson, while others have had to pause business extension plans.

What It Means for Global Relations

Although the U.S. is in trade talks with many countries, experts warn that these 2018 trade disputes could have lasting effects on global relations.

There has already been a decline in foreign direct investment worldwide, and many believe this trend will remain as trade disputes continue. This is not only due to the increased tariffs, but also the uncertainty of the market.

“Foreign investors are looking for both economic opportunities and political stability, and certainly the latter has suffered quite tremendously under this administration,” said Thilo Hanemann, a director at Rhodium Group and the author of its China FDI report, in a CNBC article, “Uncertainty Is Turning off Foreign Investors.”

Why You Should Care

Not only can these tariffs affect your business, but they also can affect how and where you ship your goods. Depending on where your goods are headed and what they specifically are, you could be looking at large penalties that cut into your overhead costs.

We could also see decreased demand for air cargo and shipping services as companies turn to domestic markets in order to reduce costs. Until trade talks are complete and agreements are made, the fate of global logistics is something we will be keeping a close eye on.

There are opportunities for businesses to be excluded from tariffs, however. Contact a UWL representative today to discuss your options.