Conditions as of mid-April

Thanks to the dedication of the Union Pacific Engineering and Operating teams, repairs have been completed safely and timely to areas impacted by historical flooding in order to restore rail service to our customers. Following is the latest update on the remaining areas that were impacted:

Widespread flooding across portions of Nebraska, Iowa and Missouri is causing major disruptions to BNSF service and operations. With recent storms and accelerated snowmelt, which has caused ice jams on area rivers, water levels have reached record high levels.

BNSF crews are working to restore service as quickly as possible. As always, safety is our highest priority. While some traffic is being re-routed, shipments destined for locations in this region will continue to experience delays.

Heavy rain and warmer temperatures from a recent winter storm, called a "bomb cyclone", have accelerated snow melt in the Missouri River Valley and contributed to ice jams on area rivers causing historic flooding in many locations.

CNN meteorologist Jennifer Gray explains that a "bomb cyclone" is a rapidly intensifying storm that occurs when cold air from the north combines with warm air blowing in from the gulf stream.  Also called "nor'easters", bomb cyclones often bring heavy rains, wind, and snow to the northeastern U.S.

Heavy flooding has resulted in roads, bridges, and rails being washed away.  Thousands have been evacuated from low-lying areas as water levels continue to rise.  Many people and animals have been trapped by high water, and in some places, whole neighborhoods are underwater.

The National Guard in Nebraska has begun rescuing those trapped by the rising water, and is even using helicopters to airdrop bales of hay to cattle stranded across Nebraska by the flooding, shown in a video posted on their Twitter.

The National Weather Service has urged the public to stay off of the flooded roadways.

Historic flooding continues across the Plains and Midwest this week with many rivers at "major flood" stage. Many roads are closed due to flooding in the region and they're closed for good reason. 50% of all flood deaths are vehicle related. Turn around, don't drown! pic.twitter.com/a557SvaKJj

The photos below from UP and BNSF show the impact of the flooding on the rail systems.  Many railways have been washed out and covered with debris.  Crews are working diligently to clear the tracks and restore service, however the current extent of the flooding could see service outages continue for an extended period. 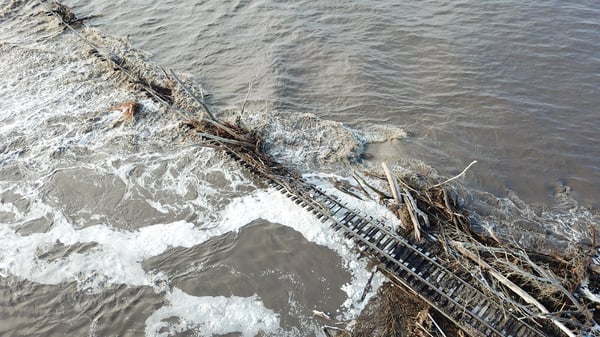 “Our goal is to restore service as safely and quickly as we can,” said Shane Keller, UP Senior Vice President - Transportation in an article on the UP website.

“It wouldn't be possible without the hard work of our employees, some of whom have had their houses flooded or are unable to access them. They are working 24/7, utilizing shift work. Many of these employees are the same men and women who have been fighting the snow and winter weather for the past few months. I'm very appreciative of their dedication."

Thank you, from UWL, to the UP team for all of their efforts to work through these conditions.

UP Network Conditions by Subdivision

At the time this article was written, the below Union Pacific subdivisions and corridors continue to be out of service due to flooding and track washouts. While in some cases estimated times of opening are listed below, these are subject to change.

At the time this article was written, anticipated Mississippi River flooding was expected to impact service on BNSF Hannibal and River Subdivisions, where main lines run adjacent to the river in Missouri. BNSF Heartland Division teams have implemented procedures, including the re-routing of some traffic, to mitigate impacts from this expected disruption.

Favorable operating conditions are expected across the western U.S. during the next several days. With no major storms in the forecast and temperatures at or near normal levels across the Northern Corridor, BNSF operating teams will continue to focus on normalizing service through impacted areas.

Below is a look at the key operational performance categories for the week ending March 14:

Total trains held for the week decreased by more than 17% with an average of 154.1 trains held versus 185.9 trains held during the prior week.

Train velocity, measured in miles per hour (MPH), was up by nearly 4% versus the prior week at 15.7 MPH.

Terminal dwell was down by nearly 3% versus the prior week at 29.1 hours. 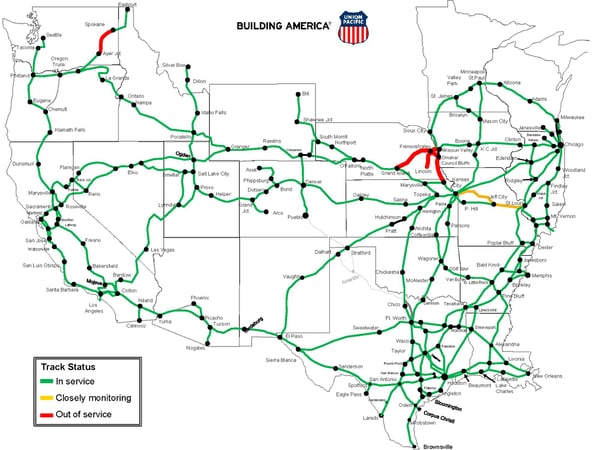