Trade wars, holidays, and chassis shortages have combined to create a "perfect storm" of terminal congestion in the ports of Los Angeles and Long Beach.  Terminal operators are struggling to dig out of the backlog, with the hope of it clearing in coming weeks.  In this article, we look at 5 major factors contributing to the current congestion on the West Coast.

What is causing all the containers to pile up at LA-LB?

Prior to the announcement of a 90-day trade war truce, importers rushed to get their cargo into the states to beat the January 1st deadline where the U.S. was planning to raise existing 10% tariffs on $200 billion of Chinese goods to 25%.

“There’s no doubt we’ve seen a surge in cargo because of the concern over rising tariffs,” Gene Seroka, executive director of the Port of Los Angeles, told American Shipper.

“We’ve also been impacted on the export side by retaliatory tariffs (from China against U.S. exports). The imbalance we normally see is a little more exacerbated than usual,” he said.

Ocean carriers added an unusually large number of extra loader vessels towards the end of 2018 to handle all of the front-loaded shipments.  These vessels were expected to bring an additional 128,000 TEUs of freight into the Los Angeles-Long Beach complex, which was already operating at capacity from the normal peak-season volume.  While this tactic may have helped BCOs get their cargo into the U.S. before the tariffs went into effect, it massively overwhelmed the terminal operators and distribution warehouses.

“We don’t have any space on dock or off dock,” Ed DeNike told the JOC. DeNike is president of SSA Containers, which operates three container terminals in Long Beach. “It will take about two weeks to clear out,” he said.

Holidays impacted labor at LA-LB. Christmas and New Years are considered no-work days under the current International Longshore and Warehouse Union (ILWU) contract.  Additionally, veteran longshoremen typically take vacation days around this time, which left many of the container terminals short staffed.  Those who did work at the terminals over the holiday season tended to be greener, less-experienced staff.

Seroka said that marine terminals “are working around the clock. We’ve seen a lot of cargo come through, and it’s been a challenge to say the least.”

In addition to the holidays temporarily reducing the pool of available laborers, port congestion and extra vessels calling the port has caused an overall labor shortage. The Pacific Maritime Association (PMA) has implemented work gang allocations.  Vessels are waiting 2-3 shifts after arrival before receiving labor, with labor being allocated based on ship size. This process delays the cargo availability, extends the vessels at berth and causes bunching of vessels as they are delayed leaving the area.

3. Factories ramp up production ahead of the Chinese Lunar New Year

Chinese New Year (CNY), also known as "Spring Festival" or "Lunar New Year", is a huge holiday in China, comparable to Thanksgiving in the U.S. or Diwali in India.  During the holiday, all factories in China shut down production without exception.

The official CNY celebrations last for one week, however many factory workers take extended leave during CNY and factories remain shut down for 2-3 weeks or more.  When factories reopen, they struggle to operate at full capacity for some time after CNY because workers often use the holiday to find other more lucrative job opportunities and don't return to work. This can lengthen production times and create a backlog of orders for the factories to fill.

To deal with the impact of Chinese Lunar New Year, many manufacturers, retailers and other importers rush to ship their products out of ports before the country begins shutting down.  This puts tremendous pressure on the factories to produce the goods and causes a rise in the number of containers being exported from China in the months leading up to the celebration. This extra volume tightens vessel capacity and puts a big strain on container terminals who must handle all the containers as they come into the U.S..

4. Warehouse space is limited from the influx of cargo

The manufacturing sector, which accounts for around 50% of imports moving through LA-LB, was heavily impacted by the U.S. tariff increases.  Retail also took a big hit.  With many BCOs in these industries rushing to get their goods into the U.S. ahead of the tariff increases, the goods need to be stored somewhere.

Shippers lucky enough to retrieve their cargo from the congested ports must unstuff the containers and return them to the ports in a timely fashion or else they face hefty detention and chassis charges.  Many of them rely on local warehouses to store and distribute this inventory. As a result, warehouses in the area are packed to the gills with auto parts and retail goods.

With nowhere for the cargo to go, it either sits at importers' facilities waiting to be unloaded, or piles up at the terminals until it can be picked up and delivered.  In fact, we are seeing importers holding onto containers for longer than normal.  The average street dwell time for a container has increased to 7 days, which is 3 days longer than containers are normally out.

When container terminals are filled beyond capacity, they sometimes have to refuse to accept empty containers, often without warning.  This creates a ripple effect throughout the logistics ecosystem. 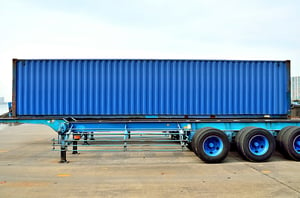 Normally, container truckers operate in a dual-transaction model, where they arrive at the port, drop off an empty container, and pick up a loaded container to deliver to their customer.

If the terminals refuse to accept empty returns, or redirect a trucker to a different facility, it is very difficult for truckers to make their appointments on time.

This cuts their productivity in half, can cause them to miss deadlines to return the empty containers, and can even result in detention charges.  All of these factors combine to create an artificial driver shortage.

Additionally, if truckers can't get appointments to pick up their import containers within the allotted free time, shippers can incur demurrage charges for containers that sit at the terminal facilities beyond the last free day.

The backlog affects chassis availability, too.  With truckers unable to return empty containers, they must bring the empties and chassis back to their own facilities to store them until they can be returned.  And with warehouses filled to capacity, some chassis with loaded containers are stuck sitting idle at importers' facilities, like "mobile warehouses", until they can be unloaded.

We are seeing many containers and chassis staying off dock for longer than normal.  In fact, the average "street dwell" for a chassis currently is five days, which is up from 3.9 days from this time last year. Terminal dwell time for chassis is three days, and around 8% of chassis are out-of-service, according to stats posted on the website of the "Pool of Pools".

If you are importing cargo into the West Coast and struggling with the current congestion issues, just know that this situation is temporary. With the Chinese New Year approaching in February, we should begin to see a drop in import volume.  Port and terminal operators are working around the clock to clear the backlog of containers and expect the congestion to ease before the end of January. They have also pledged several longer term solutions to combat the problem.

In the mean time, it is important to do what you can to protect yourself from costly demurrage and detention charges.

To learn more about what demurrage and detention fees are, and how you can avoid or minimize these charges, check out our comprehensive guide here: Clarifying the Difference Between Demurrage, Detention, and Per Diem Fees

Remember: Always pick up containers as soon as possible and return them back to the designated terminal as quickly as you can.