Shipments, especially heavy shipments, that pass through the Panama Canal may still be affected as carriers could restrict or roll bookings to meet the current draft requirements.  Vessels with drafts exceeding the restrictions will be required to trim or off-load cargo prior to transiting the canal if water levels are insufficient at the time of crossing.

A drought spurred by a weather phenomenon called "El Niño" caused ACP to impose a draft reductions for vessels transiting the Neopanamax locks of Panama Canal.  However, rainfall in the Panama Canal watershed has let ACP postpone the effective date several times.

“If the dry spell continues, we may need to restrict it to 44 feet. But very few container ships have a draft beyond 45 feet, so the impact is not that much," Jorge Luis Quijano, administrator and chief executive of the Panama Canal Authority, told the JOC earlier this month.

"It will start to hit us at a 44 foot draft; the next 20 days are critical,” said Quijano.

The evolution of container ships

The infographic below shows the evolution of containerships over time.

Source: Ashar & Rodrigue, 2012. All dimensions are in meters. LOA: Length overall.
The loads displayed on deck represent maximal possible loads, which would involve a large share of empty containers.
The loads are usually 1 to 3 container less in height.  Containerships usually carry less containers because of weight restrictions and lack of demand.

When draft restrictions extend to both the Neopanamax and Panamax locks, most container ships will be affected in some way.  According to JOC.com, carriers anxious to avoid having containers stranded at the entrance to the canal trimmed loadings on vessels to Asia by 10 percent.

To comply with the ever-shrinking Panama Canal draft restrictions, vessel operators must carefully control the weight of cargo to ensure that their ships can safely transit the canal without issue.

Some ocean carriers have immediately begun restricting heavy containers greater than seven to eight tons per TEU from loading. Carriers may also restrict or roll bookings during this period to plan their loading and adjust their drafts accordingly.

Precipitation in the Panama Canal watershed during December 2018 fell 90 percent below the historical average, causing water levels in Gatun and Madden Lakes to drop below expected levels for 2019.  According to waterway authorities, January 2019 was the driest month the country has seen in the past 106 years.

The cause of the drought can be attributed to a weather phenomenon called "El Niño", where changes in sea surface temperatures (SSTs) affect the atmosphere, resulting in distinctive changes in rainfall patterns across the Pacific Basin.

“The intensity of the solar radiation, added to a 30% increase in the winds, is causing the water in the lakes Gatun and Madden to evaporate at a faster rate than it enters and lake levels are falling at breakneck speed,” said ACP Vice President for Water and Environment Carlos Vargas. 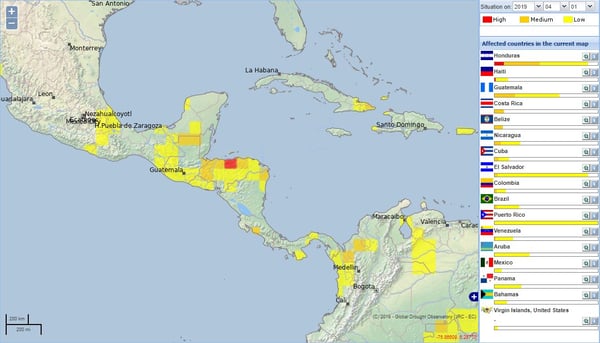 “The Panama Canal has taken measures in order to reduce the impact of the [dry] season by using the water-saving basins, closing the Gatun hydropower station, as well as implementing the Panamax Water Conservation Programme. This includes not using hydraulic assist at the locks, tandem lockages (two ships in one lockage, whenever possible), and chamber cross-filling operations,” said Vargas.

While the Panama Canal Authority has attempted to conserve water to avoid adverse effects on business, the drought has caused the authority to announce several draft restrictions for vessels transiting the Neopanamax locks since January.

During the dry season, draft adjustments for the Neopanamax locks are typically announced in 12-inch (30.5 cm) decrements at a time, generally with at least four weeks advanced notice.

If you are shipping to the Gulf or the East Coast and your shipments move through the Panama Canal, make sure to plan accordingly.  Heavy shipments greater than 7 tons/TEU will be most at risk of getting rolled or restricted at loading, so be sure to confirm verified gross mass (VGM) weight limitations prior to shipping.

If you have any questions, please contact your UWL Logistics Coordinator for more information, or contact us today.