This is a general capacity issue across all major ocean carriers servicing Brazil, and not specific to any one line or vessel. Hopefully, the situation in Brazil should be normalized within the next 60 days, but only time will tell.

Forecasted by the Brazilian Ministry of Foreign Trade and Services (MDIC), current lack of capacity and service disruptions have come as a result of rising export cargo volumes and the fallout from the Brazilian truck driver strikes that occurred in May.

Carriers are rolling bookings in “cascade” and trying to allocate all the cargo that is accumulating.

"We heard about vessels with 300% of the capacity confirmed, what that means is that 200% of the bookings stayed on the ground," said Barbara Echelmeier, UWL Sales & Operations Manager in Itajaí, BR.

New bookings are being confirmed for vessels sailing from September on only, so shippers are advised to request bookings far in advance.

Existing bookings are being canceled or transferred to other vessels, but the voyages are expected to be delayed by two or more vessels out.

About the truckers' strikes 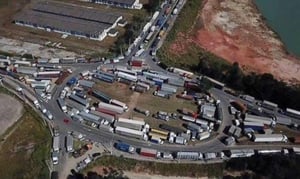 In May 2018, Brasilian truck drivers went on strike, blockading major highways across 23 states for over 10 days. The strikes significantly affected the logistics flow throughout the country and sent many cities into the State of Emergency.

"Before the drivers’ strike, we were already facing an increase in the export volume from Brazil and having some difficulties in confirming bookings for the following 2-3 weeks," said Echelmeier.

"After the drivers’ strike, a whole problem was generated in shipping," Echelmeier explained, "once thousands of containers remained on the ground for 2 weeks or more in the entire country and lots of vessels have canceled and postponed their calls in Brazil Ports."

Port congestion in the wake of the strike continues to cause delays months later, and it will take a long time for the ports across Brazil to return to business as usual.

UWL will keep following the events occurring in Brazil, so be sure to check back on our blog and follow us on social media for more updates!  We will work to mitigate any shipment disruptions for our customers, and we thank you for your business and continued support.

If you think your shipments may be affected by this announcement, have questions, or need any assistance, please contact us today.