It's March and that means Bid Season is underway! What should transpacific importers prepare for as they enter into ocean freight negotiations this year, and how will today's market conditions influence those discussions? Find out in our latest Market Update.

Ocean freight bid season typically runs from March through April, with the new contracts beginning on May 1st. This year, we anticipate that negotiations will wrap up a bit earlier than usual — both BCOs and our agents are expecting space to go quickly. There is only so much, and once it's gone, it's gone.

What is the best way to ensure you can get your hands on some of that highly coveted capacity at a fair rate? According to UWL Import Pricing Supervisor Carston Cash, you have to bring the volume.

"There has to be enough volume on a given port pair, which is typically 300 TEU annually, with consistent weekly volumes," says Cash.

Carriers prefer to see consistent, weekly bookings because predictable volumes are easier to plan for and manage. Accurate volume forecasts help the carriers proactively plan loads and reposition equipment. Compare this to periods with no activity and then a sudden, sporadic spike in volume — handling that is much more challenging from a carrier-perspective.

"Of course, there will be occasional slow periods which is understandable, but what they're really looking for is that continuous, dependable business." he said.

"Be cognizant of your weekly allocation over the 52 weeks and make sure to show up with volume,” Cash explains. “We expect this market will be challenging through November and the winter holidays. What happens after that is still up in the air."

Let's take a look at what's going on in the market now and what to consider as you look to negotiate contracts this spring.

Here are some of your biggest questions about the market going into contract season, answered. If you have a question that we didn't cover here, shoot us an email at marketing@shipuwl.com or contact your UWL rep and we'll help you.

What are ocean freight rates currently compared to last year?  With transpacific rates to the West Coast hovering between $3700 - $4065 and rates to the East Coast sitting around $4520 - $5721, the cost is nearly 250% more than the same time last year. This is heavily influencing contract negotiations in 2021. "The carriers have all the power,” Jon Monroe, one of our agents at WWL told The Loadstar.

There was no GRI on 3/15, so rates are holding steady. However, premium services are still being pushed hard and even Freight All Kinds (FAK) shipments are being pushed to premium. We are seeing some inland point interchange (IPI) cost increases due to congestion issues, and some carriers are limiting their inland bookings out of California as a result.

“What a situation,” said Mr. Monroe. “Normally this time of the year, carriers begin to blank sailings to keep space tight to keep rates up, but this year there is no need. Vessels are waiting for berths in Savannah, southern California, Oakland and Vancouver. In any given day this week, we have had 700,000 TEU off the shores of US ports waiting to be offloaded.”

And the demand keeps coming.

What should we expect in terms of demand for 2021?  While we can never be 100% certain what will happen in the future, and demand will vary by product/industry, the National Retail Federation (NRF)'s Global Port Tracker forecasts retail imports for the first half of 2021 at 11.7 million TEU, up 23.3% from the same period in 2020.

How long will it last? Amit Mehrotra, head transportation analyst at Deutsche bank, predicts the bull run for imports is nowhere near over.

"Now, if you look at inventory dollars per store, they’re actually up year-over-year. What has changed is that sell-through rates are way faster. Inventories are flying off the shelves faster than companies can replenish them. That is why the inventory restocking cycle is still in the early innings,” said Mehrotra.

Read the full interview in Greg Miller's piece, Deutsche Bank on import bonanza: ‘You ain’t seen nothing yet’ on FreightWaves.

What about free time? After all of the equipment issues we've faced in 2020, free time will definitely be under scrutiny this year. As we shared in our last article, if an importer traditionally had 10-14 days of available free time, we're anticipating carriers to clamp down on that, dropping to 7 calendar days, possibly 10 free days as a best-case scenario.

Carriers need to keep their equipment moving, especially given the intense demand they're seeing right now, and they don't want their boxes tied up for weeks waiting to be unloaded. They need to get those empties back into rotation and cutting down on allotted free days is one way to do that.

Make sure to forecast your future volumes and place your bookings early so that you can get equipment where and when you need it. See the equipment availability chart on our Blank Sailings report below to view current container availability by origin.

How will fuel/bunker cost factor into the market this year?  A year ago, everyone was worried about IMO 2020 - a new sulfur regulation that many feared would cause fuel prices to jump drastically. But then COVID-19 happened and the cost of marine fuel actually dropped.

Now, there is a renewed focus on sustainability, and market factors are causing the price of Very Low Sulfur Fuel Oil (VLSFO) to increase. In fact, we saw a change of +$200 per metric ton from Oct. 2020 to now.

You can see the trend of rising fuel costs in the chart below from ShipAndBunker.com, which looks at marine fuel prices in LA/LB over time. If this trend continues, we expect to see freight rates rise in 2021 due in part to the rising cost of fuels. 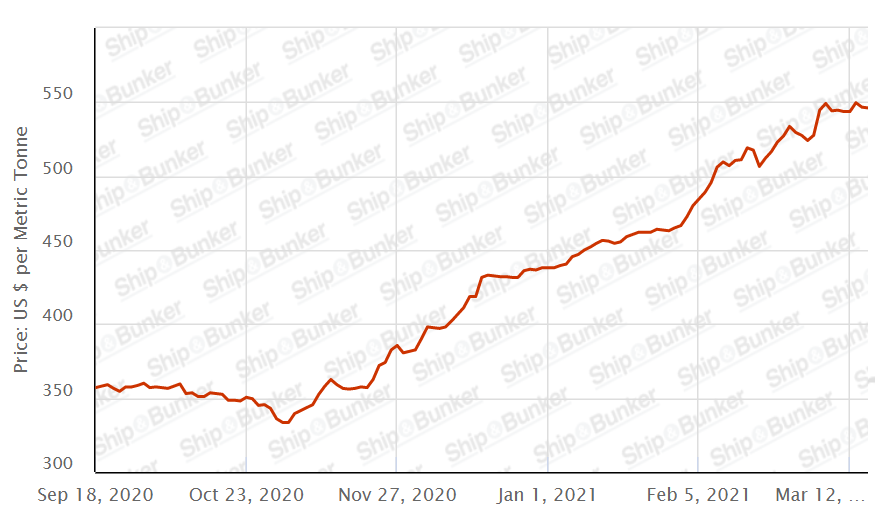 As you head into contract negotiations this year, consider the following:

Blank sailings by the numbers

There have been 14 blank sailings announced so far from Week 11 to Week 17.

Due to continued heavy congestion in Los Angeles / Long Beach, we're seeing a lot of cargo be diverted to use PNW/USEC/CANADA routing to inland destinations. The space to PNW and USEC is currently very tight, and if the situation in LA/LB does not improve, it will only get tighter. Now, let's look at conditions at three major gateways.

Los Angeles / Long Beach - According to a recent update from carrier Hapag Lloyd, as of Friday, March 12th, there were 24 container vessels awaiting berths in LA/LB. A spike in import volumes and limited labor / split shifts due to COVID-19 are the primary drivers of the severe congestion.

"The demand for available labor affects all terminals, turnaround time for truckers, inter terminal transfers, the number of daily appointments available for gate transactions and generates delays in vessels operations," the update said.

Changes of destination (COD's) and container "dig outs" are being restricted due to limited terminal space. "Customers are urged to continue to expedite the pickup of import containers and inform any COD requests at least four days before the start of vessel operations," according to Hapag's update.

Terminal congestion and COVID-19 related labor shortages on the trucking side are also limiting trucking power and contributing to delays for all door and ramp intermodal moves. For rail out of California, capacity constraints and railcar shortages are causing delays of more than a week to some inland ramps.

New York / New Jersey - Congestion at the Ports of NY/NJ doesn't seem to be letting up. Import dwell times are higher than normal, and there are even reports of containers sitting, waiting to get on the rail since February with no luck. The increased import volumes are causing long truck lines and traffic jams on port roads. Truckers are having difficulty getting chassis, which is decreasing their productivity, leading to longer turn times and fewer dual transactions. The unexpected closure of a major storage yard near the port also caused issues for truckers this month, making it difficult for them to return empty containers. Saturday gates and extended hours at some facilities have been implemented to help reduce wait times and improve congestion.

Savannah - As of March 12th, there were 20 ships at anchor outside of Savannah, according to Hapag's update. These ships could be stuck waiting for 4-5 days to berth. What has caused the delays? An intense fog in earlier weeks caused periods of river closures. The weather has improved since and the terminal is now working through the backlog, with the primary focus of getting empty containers off the port.

If you have questions related to either of the below vessels, please contact your UWL Representative for more information.

In March, the Port of Virginia put in place firm exporter receiving dates (ERDs) for containers for all outbound vessels, JOC.com reported.

"When delays occur, terminal operators will push back ERDs — the earliest available date and time an exporter can drop off its container," explained JOC's Ari Ashe. "The official ERD is important because exporters will book drayage and chassis accordingly. When a terminal operator pushes back the ERD, exporters pay storage and chassis rental fees as their container idles, often in a drayman’s drop lot."

Floating ERDs have been one of exporters' top concerns, and this move by POV should bring them more schedule certainty as well as some cost savings. "With a fixed ERD, exporters in Virginia will no longer be exposed to those charges," Ashe reported. ERDs will begin seven days before the vessel is scheduled to arrive, with a notification 48 hours before the receiving window opens, the Virginia Port Authority said.

Congress calls on FMC to push carriers on issue of empties vs. exports

111 members of Congress sent a letter to the FMC urging them to take action on the issue of carriers choosing to load empty containers instead of American exports. The letter read:

“Over the past year, American producers, exporters and entire economic sectors have grappled with widespread delays, bottlenecks and increasing fees at our ports.

These challenges are exacerbated by reports that VOCCs [vessel operating common carriers] are delivering shipments to US ports and then electing to leave without refilling empty containers with American goods for export.

Such activity constricts entire supply chains and propels trade to move only in an inbound direction. These conditions are unsustainable for exporters, put significant strain on the U.S. economy and simply unacceptable.”

We'll continue to monitor this story and will report should the FMC take action.

Capacity to and from Brazil is tight on several key routes:

In March, Senator Mike Lee (R-Utah) reintroduced a bill called the "Global Trade Accountability Act" which would require Congressional approval for unilateral actions enacted by the president to increase trade barriers. Learn more about the bill and why it was introduced here or read the full text of the bill here.

"First Sale" Customs Programs may be under scrutiny after the U.S. Court of International Trade (CIT) issued a decision in Meyer Corp., U.S. v. United States. The decision questions the continued viability of first sale for suppliers located in non-market economies, US Trade Monitor reported. Learn more about this important ruling and its potential ramifications here.